In recent years there has been a big shift in mind-set – and the resulting acceptance is that a cat is quite possibly the way of the future for a number of reasons. In South Africa particularly, with our unique launch requirements and unpredictable sea and weather conditions, it has been an ongoing search to find a boat which is not only soft riding, but dry, stable and economical – and Yamaha believes the 156 SeaCat Blast could be just the ticket.

During these uncertain economic times, where fuel prices have virtually doubled in what feels like overnight, many keen skiboaters have been forced to either cut down on excursions or reduce the size of their craft. However, the SeaCat Blast has provided the alternative, where, particularly in the case of a novice buyer, one can still afford to buy, run, and maintain a vessel which provides the ride comfort, stability and practicality of a much larger vessel.

I met up with Greg Bennett of Yamaha SA at Durban Ski Boat Club who walked me around the SeaCat 156 Blast and explained that the name is a creative acronym for this boats innovative design features:

I would be keeping an eye on these elements to see how they come together to result in an ideal design.

Deck layout
The ideal crew for fishing would be three, but a family of four would feel just as comfortable for a day on the water.

In the past I’ve not been a huge fan of centre consoles, particularly in smaller boats, as I felt that not only did it waste the most “usable” and stable area of your boat, the tendency to place the console further aft led to poor weight distribution. However the manufacturers of this SeaCat have sensibly moved the console further forward and I find this has increased skipper visibility and lateral stability during travel. The console boasts a large storage cupboard which also conveniently disguises the steering and remote cables, providing a nice flat uncluttered deck with a large centre fuel hatch containing four 25-litre jerry cans.

A nice added touch was the dashboard which features two Perspex spray proof cubby-holes − one for the GPS and the other for personal goods. I was pleased to note that the top of the dashboard had a lip to stop items sliding off, though I would suggest that this be raised slightly. Drainage channels either side were a welcome addition as these areas often become pools of rainwater which damage cell phones, and just about everything else you place there.

Ergonomic placement of the controls allowed use of the standard Yamaha remote boxes and doesn’t intrude into the crew’s position.

The stern transom area featured a nice, high engine well which you’ll find is most effective in keeping the deck dry whilst being launched or when you’re backing up onto a fish. 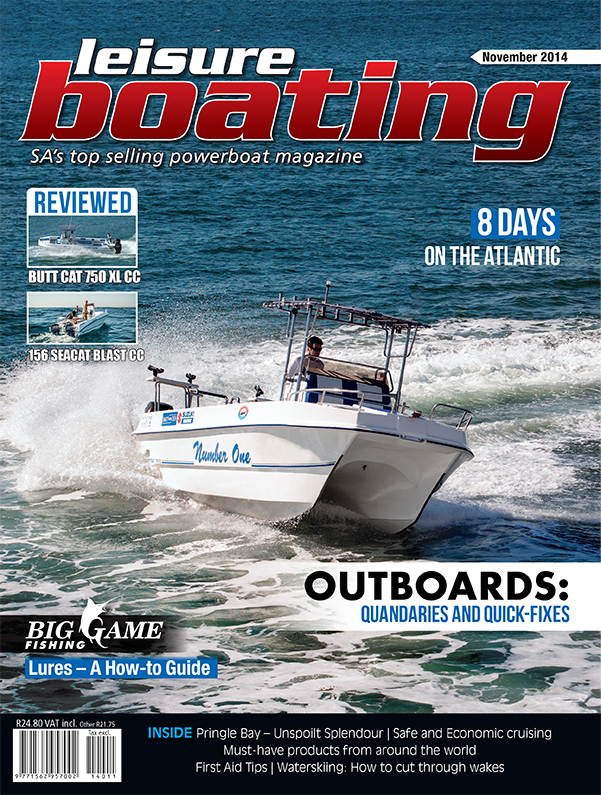