The Trans Atlantic Inflatable Boat Challenge (presented by TABA – The Trans Atlantic Boating Association) took place over the renowned “Argus” weekend in the Cape, and saw several boating enthusiasts race from the Olifantsriver Mouth to Melkbosstrand over a three-day stage. 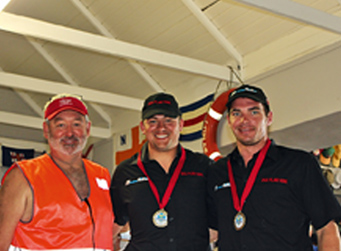 The group of inflatable boat enthusiasts that took part in this race consisted of 56 pilots and co-pilots, the team’s technical crew, as well as a group of spirited supporters. The racers got together on March 8th in Strandfontein on the serene West Coast and undertook to complete this racing boat adventure, stretching over a total distance of 423 km to Melkbosstrand, in the three respective racing classes as well as the Novice/Beginner’s class. Unfortunately, as a result of very heavy fog on the first day of the adventure, the teams had to first travel by road via Lambertsbaai and were only then able to launch their boats after an anxiously awaited two hour delay. Eager to get their boats off the trailers and into the water, the teams finally started the first leg of the race after two hours when the sun eventually cleared the fog. They immediately got started on the day’s time trials towards Elandsbaai and Velddrift via Dwarskersbos.
Whilst receiving their pilot’s debriefing on the Friday evening, the teams also started with the annual fundraiser aimed at gathering funds for the West Coast NSRI stations. Funds were raised through an already very familiar and popular TABA wine auction as well as a “fine’s session” which proved to be very entertaining for participants and bystanders.

On Saturday the 26 boats took to the water again. They faced relatively favourable sea conditions and stopped at Paternoster for a refuel after tackling the most dangerous part of the adventure – around the coast past Cape Columbine towards Langebaan. With swells ranging from 4-6 m, the NSRI and their teams of professional volunteers guided all the participants through the conditions towards Club Mykonos in Langebaan where two of the teams capsized their boats in the waves. H. de Bod and J. Kotze (Team Robertson Abattoir) misjudged a wave entering into Mykonos’ Hobie Beach and flipped their boat in the process. Shortly after the incident, F. Simerie and J. Jordaan (Team Viking 2) also flipped their boat, but managed to fix it and went on to win the special stage down to Yzerfontein. The time trial/long haul section was done in really favourable sea conditions and raced over a distance of 66 km towards Yzerfontein. Stefan Lindeque, the Melkbos local, logged the fastest time of completion of this stage ever, finishing this leg of the race in a magnificent time of just 51 min and 18 seconds. The Surf section of Day 2’s racing was met by a crowd of hundreds on Yzerfontein beach with spectators cheering on their favourite teams in the Surf section, a section where things could go wrong, or right, very quickly…

This section of the event tested the pilot’s and co-pilot’s skills as well as their understanding of each other and the conditions they faced. It also tested their knowledge of manoeuvering their pencil duck through the waves and around all the buoys and flags – without room for error. Prior to the race, the teams were greeted and accommodated in true West Coast spirit and once again, funds were raised for the NSRI at the evening’s function. On day three, Sunday morning and in good old Trans Atlantic style, the contestants were greeted to Long Haul towards Melkbosstrand with 3-4 m waves. The teams had to tackle the big seas before entering the open sea and raced full throttle towards the finish line. The conditions however, did change and the contestants enjoyed a good, flat out race towards Melkbosstrand.

The “Atlantic” as the event is commonly known, is currently one of the biggest sea training exercises for the NSRI, where three NSRI stations, namely Melkbosstrand, Yzerfontein and Saldanha (Mykonos) jointly participate and their male and female volunteers get to apply what they train for during the year. The NSRI were responsible for the safety of all the participants during the grueling event. After some tough competitive racing, it was N. Smith and D. Theron (Team Mweza Transport/DGS Plant Hire – Gemini) who took honours in the Standard Class with an overall win time of 3 hours and 20 minutes. S. Lindeque and T. Ingram (Team Boost Performance – Aquarius) won the Blueprint Class in a very fast time of 3h 04min 53sec and in the Modified Class, it was F. van Wyk and G. Gouws (Team Gemini/Marlow) in a total time of 3h 16min 32sec. V. Daniller and R. Dippenaar (Team Daniller Grondwerk) was judged to be the best up-and-coming racing combination of the event and a team to watch for in the future. The award for the most spectacular flip without any doubt went to A. Swanepoel and P. Human (Team Mr. Video) for their fantastic crowd pleasing barrel role that they carried out with near perfection on day two’s Surf Circuit.