Aluminium boats certainly have found their spot in the South African marketplace due to their efficiency and practicality. Coincidentally, these are just two things which the Tracker 1860 Centre Console takes very seriously. Dean Castle checks out the 2012 Grizzly aluminium boat.

At 5.59 m in length, with a 2.13 m beam, the Grizzly 1860 Centre Console is big enough (and rated for enough power!) to carry your buddies and all their gear to everyone’s favourite fishing spot. This craft has even become the boat of choice for many American hunters for its ruggedness and ability to travel in shallow waters with the least environmental impact.
The all-welded aluminium hull, transom, and longitudinal stringer system gives the hull plenty of strength, yet allows for a comfortable ride – perfect for most South African waterways! 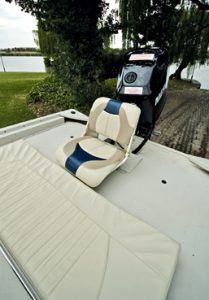 At the helm, a streamlined, one-piece, roto-moulded console is your command centre. At the helm, you will find an Acrylic windscreen which deflects the vast majority of oncoming wind for the skipper, thanks to its height. This screen is also bordered by a sturdy grab rail which would come in handy especially when manoeuvring around when on the go. Set inside the dash, you’ll find a neat set of engine gauges, two cup holders, and space for fitting the fish finder of your choice.
For fishing, you’ll find a raised bow and stern casting decks, both with removable seats. A non-skid floor and deck liner ensures secure footing, even after a cold, dewy night. Storage is located in both decks, under the console, and along the port side of the helm for standing rods. Un-rigged rod storage is found in the gunnels. An aerated livewell in front of the console ensures everything you catch stays healthy throughout your excursion.

For extra versatility, you can add on any number of accessories to fit the exclusive Versatrack gunnel system. Options include rod holders, tackle trays, tool holders, drink holders or a cutting board. The all-welded, unitized construction and interior components contribute to the structural integrity brought about from the longitudinal stringer construction and transom reinforcements. Furthermore, the Grizzly 1860 has pressed-in chines for extra strength and also provides tracking stability. Naturally, this 1860 has got a bilge pump – which is probably more for rain water, since it’s not likely that you’ll get water inside the interior. The boat as reviewed was also fitted with a quality electronically operated MotorGuide wireless trawling motor – which is efficient and quiet so that you don’t scare off the catch. As reviewed, the 1860 has a mostly off-white colouring which ensures this aluminium boat doesn’t look out of place. It also did well to keep the all-metal boat cool to the touch throughout our trip.

Performance As reviewed, the Grizzly Tracker 1860 CC was fitted with a 115 HP Mercury Optimax outboard engine and rides on a custom-matched trailer with Galvashield protection and EZ-lube hubs. On the hull, the pressed-in strakes do well to provide tracking stability and the Mod V hull design provides a smooth, dry ride. A built-in fuel tank carries 75 litres – which is plenty to keep the frugal 115 HP Mercury running all day while you’re on the hunt for that monster Bass. The package, as reviewed, has an approximate weight of just under 800 kg, so you can look forward to towing this craft around to your hotspot with most vehicles. All up, the Grizzly Tracker 1860 can take seven passengers, but I wouldn’t recommend it since it’s going to mean less angling space for you. As you can expect, while running, an aluminium boat doesn’t have the same characteristics as a fibreglass counterpart.

While every effort has been taken to ensure every lock is tight-fitting and that everything that can rattle doesn’t, you still know you’re on an aluminium boat when running. It’s not off putting in any way, but do take it into account if you’re only familiar with fibreglass boats. The Grizzly 1860 runs very well with the strong Mercury 115 HP Optimax.

However, this direct injection, 1.5-litre, 2-Stroke engine produces 84.5 kW, which is probably the most you would ever need on this craft. In my opinion, you could also opt for a 90 HP 2-Stroke or even a 60 HP Big Foot, especially if you’re at the coast, and still get a great performance. With just a small chop on the water, the Grizzly drives well and flat (with a minimal draft) and is easy to control.

She’s stable too, even at standstill, so that you feel safe when perched on the deck and reeling ‘em in! Conclusion With a boat like this Grizzly, you’re going to have a lot of river and estuary angling on your mind. But with a Tracker 1860, you won’t have to worry since she comes with a five-year hull warranty. She’ll look after you while you look after the fishing! Pricing of the Grizzly Tracker 1860 CC starts at R195 000.

For more information contact Leisure Marine on (011) 318 8252 or email info@leisuremarine.za.com