Finally, it has arrived! Yamaha recently launched their all-new 2012 PWC line-up at the Gordon’s Bay Harbour Island, and the highlight was the complete makeover of their popular FX Series, with the FX High Output (HO), Cruiser HO, Super High Output (SHO) and Cruiser SHO incorporated into the fleet. Leisure Boating attended the launch for a much-anticipated peek at the 2012 Yamaha FX series.

This year marks the 10-year anniversary of the Yamaha FX model, the first production 4-Stroke PWC to hit the marketplace, as it came to be known as back in 2002. But a decade down the line and it’s clearly time for a new look and make-over (even though the series still shows strength!). But how does one remake a model that has proven to be as successful as the FX? Knowing that it’s no easy feat Yamaha have redesigned the FX, but with a little more focus on driver and passenger comfort. 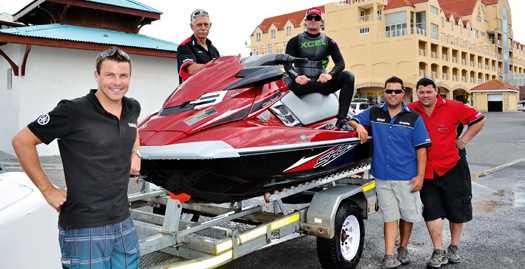 Yamaha’s general marine manager Greg Bennett explained that “compared to competitors, the FX might not be the most ‘bling’ wet bike around, with hardly any fancy bells and whistles. However, Yamaha look towards the future, where simplicity, ease of maintenance and longevity are key characteristics in the long run.”
With the new Consumer Protection Act in mind, Greg said that when the time comes for you to trade in your PWC, the re-sale value of a more simplistic (yet practical!) Yamaha PWC far exceeds that of PWCs which are mainly technology-driven. But don’t get me wrong. The new features on the FX Series will bring a smile to your face and keep you occupied for hours. But the proof of the pudding is in the design, where rider comfort and luxury are far more important to Yamaha than an adjustable suspension, or on-water brakes.

Yamaha claim that their FX Super High Output (SHO) model is the “smoothest, most powerful 3-seat touring machine they’ve ever made”. This is largely thanks to the lightweight (and longer!) NanoXcel hull and deck. Yamaha’s unique NanoXcel is 25% lighter than conventional materials, providing the FX SHO with extreme agile handling as well as optimum fuel-efficiency. But the big plus factor is that this new hull design offers more space and stability, with extra storage and even more rider comfort, as I experienced later on during our water test. Yamaha’s sophisticated Electronic Throttle Control system has some pretty nifty features. The Cruise-Assist allows you to set and maintain specific speeds which prove to be quite useful when you’re an avid jetski fisherman. The No Wake Mode helps navigate with ease through low speed areas – and to help you manoeuvre smoothly in tight spots. The Reverse Traction Control will prevent accidental over-revving in reverse. From the unique tilt-adjustable steering to the comfortable two-piece seat, and from the redesigned stern platform to the deeper step and twin handles for re-boarding, the FX SHO sets new standards.

The watertight storage compartments are plentiful and strategically placed around the craft, offering 40% more capacity than previous FX models. Yamaha’s Quick-Shift Trim System (Q.S.T.S) gives you an incredible advantage over other watercrafts. The comfortable twist-grip gives you click-click control, on-the-fly, of five trim positions with a 24-degree range. Just imagine, with a mere twist of the handle and click of a button, you can trim in during a really tight turn, and trim out again to blast away at top speed – pretty cool, huh? In South Africa, crime is often an issue, which is why Yamaha have introduced the innovative Remote Security (with Low RPM mode). One click of the remote engages a special L mode (low RPM) to limited top speed, ideal for controlled manoeuvering. For your security and peace of mind, pushing a second button disables the ignition, preventing an accidental start-up or unauthorised joyride. Alongside its stylish, easy-to-read analogue speedo/tacho unit, the FX SHO has a digital, multi-functional display with new, centrally positioned buttons that allow fast access to readouts for speed, distance, fuel level, running hours and battery voltage.

The dials are now situated conveniently between your legs, meaning no more uncomfortable reaching over. You’ll now find yourself playing with the buttons more often. Automatic low fuel, oil pressure and overheating alerts keep you informed too. Renowned big wave surfer and avid jetski fisherman Jeremy Johnson and I took the ski for a run out of Harbour Island into the open sea. A firm surface chop and gusty wind made conditions tough, and there was no chance of staying dry on the FX SHO. But nonetheless, the FX proved to be the most fun one can have with your clothes on – even though it gets completely soaked in sea water!

One of the largest engines in the industry (1.8-litre), the FX’s 4-cylinder 1 812 cc Super High Output motor is an absolute beast on the water. The Hyper-Flow jet pump with its 3-blade impeller turns power into electrifying acceleration while the Electronic Fuel Injection (EFI) gives smooth power output and efficient, economical running, even on regular unleaded fuel. While out at sea, I could immediately feel the longer, lighter hull (19 cm longer than the previous model), providing a more comfortable, softer ride with better lean-in character and better straight-line tracking. But the power was most impressive.

The slightest touch of the throttle and one immediately feels the rush of forward motion, which, on more than one occasion, left me holding on for dear life! “With the FX Series, we’ve gone a long way to cater for the family man,” said Greg. This is evident with the addition of the newly ergonomically developed seat in order for all three people onboard to have their own independent seat position. “Yamaha’s unique new Theatre-style cruiser seat gives a more comfortable and luxurious riding feel for the entire family”. But the speed-freak, adrenaline-junkie, big wave rider or even the avid jetski fisherman will find that Yamaha’s FX Waverunner Series will cater for all your PWC needs. For more information, contact your nearest Yamaha dealer or visit www.yamaha.co.za