The 2012 All Coastal Provincial was hosted in the picturesque Christmas Rock by Christmas Vale Ski Boat Club. Congratulations to the organisers who made great efforts in ensuring all participating teams were well accommodated, fed (glowing reports on the boat packs!), and made to feel very welcome – a really well organised event. 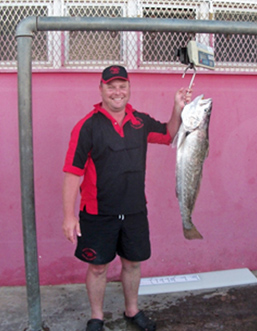 Special mention on day one goes to boat Fugly (skipper Gavin Roux) with 147.3 points, which included a Cob of 5.58 kg, a Black Steenbras of 5.12 kg, and a Copper of 5.58 kg in their catch bag. Day two and three kicked off under similar conditions. The water temperature again played a big factor with the lowest recording at 14.2 degrees. Nonetheless, the skippers showed their metal and after some hard angling, a good mix of species and some nice individual catches were recorded. Special mention on day two went to boat That Darn Cat (skipper Mark Norton) with 71.91 points including a Stump of 6.13 kg, a Stump of 4.42 kg and 2.52 kg. Special mention on day three goes to boat Fugly (skipper Gavin Roux) with 221.35 points including a Cob of 6.7 kg, a Con of 4.66 kg and a Stump of 2.8 kg. Well done again to the organisers, skippers, launch team and the participants for a great event! For more information, visit www.sadsaa.co.za