The fourth consecutive Full Release Billfish Classic, hosted by SADSAA, got off to a brisk start on Tuesday afternoon (22nd of February 2012) when anglers aboard 70 boats arrived to register for the tournament in search of one of Africa’s most elusive big game fish. Some big Marlin were caught, but the competition also promoted fishing conservation. This is the report of what went down. 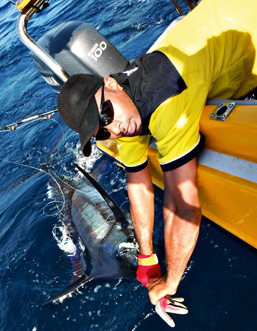 This event is structured on the same lines as the majority of Billfish tournaments held in US waters, i.e. full catch and release where anglers fish for a prestigious trophy and medals. Plus, there’s the added lure of excellent prizes!
Since its inception, the International Game Fishing Association (IGFA) have recognised this tournament as a qualifying event for the World Offshore Championships – and therefore the winning team are invited to participate in the Overall Championship in Cabo, St Lucas, next year.

To add further excitement to this event, SADSAA now supports the Pop Up Satellite Archival Tag (PSAT) programme jointly run by IGFA and Stanford University. The tags are inserted into the Marlin, collecting data for approximately 120 days, thereafter the tag pops up to the surface and transmits the information back to Stanford University.
A total of six tags were sponsored and available to be deployed during the Tournament. We were delighted to welcome representatives from the IGFA, Jason Shratwieser and Eric Combast, who were with us throughout the event.The first day produced beautiful conditions, ideal for Marlin angling, and all the boats got out to sea safely. In Richards Bay, radio communication can be difficult. Nonetheless, by mid-morning, it was obvious that there were Marlin around as reports of strikes were coming in quite regularly. All was revealed when the boats docked and the anglers came to register their releases and check their tackle – 15 Marlin and three Sailfish were released on the first day! We were delighted to hear that the first PSAT ever to be deployed in the Southern Hemisphere was used to tag a Blue Marlin by Riaan Chalmers on the boat ‘BIG W’.
The forecast for Thursday was not good when a big south-westerly wind came through overnight, causing the tournament to be called off for the day. That evening at the braai, held at the ski boat club lapa, the talk was positive as the forecast for the final two days was looking promising.

Friday, at first light, looked like it was going to be a good day; but the north-easterly wind picked up fairly early making sea conditions difficult due to the previous days westerly. It did prove to be another good day for Marlin. With 11 fish tagged and the second PSAT deployed by ‘ENIGME’, also in a Blue Marlin, it was looking even better. At the end of Day three things were looking tight on the leader board as several boats had managed two Marlin. The race was on for someone to get their third fish early in the last day.

Saturday dawned a lovely day, but unfortunately the north-easterly picked up in force early in the day. There was very little current and the sea became ‘wet’ and uncomfortable, especially for the smaller boats who returned to base early. It also seemed to have an effect on the fishing as only five fish were released: three Marlin and two Sailfish. The most important release on day three was on the boat ‘Trinity’ who released their third Marlin at 11h50, and the only boat to release three Marlin during the tournament making them clear winners! On Saturday evening, the anglers assembled in the marquee for the prize giving – the majority of which looked very smart in their Columbia shirts. Dick Pratt, the tournaments officer, and Marius Vermaak (SADSAA president), went through all the usual formalities and thanks before getting into the main part of the evening, the awards.

Each angler who released a fish was presented with a medal. Robson Green from the UK TV Programme Extreme Sports Fishing, fished on ‘MESTEPH’ on the last day of the tournament and was also presented with a medal as a memento of his participation.
Marius Vermaak presented the IGFA representatives with a plaque, and both Jason and Eric said they had had an enjoyable week. They were really impressed with our event and were also surprised at the number of species of Marlin we catch in our waters.
The trophy and cheques were then presented to the winners ‘Trinity’ on 300 points, and then to ‘Dohazi’ (2nd place) and ‘Mischief II’ (3rd place). Both teams were on 200 points but it was decided on the time based International rule “first last fish”. In total, 34 Billfish were released: five Sailfish, seven Black Marlin, four Striped Marlin and 18 Blue Marlin. On behalf of the SADSAA Executive and Committee, we would like to thank both our sponsors and the anglers for their participation, and look forward to seeing everyone back next year.