M/Y Vertige was presented at the 2017 Monaco Boat Show for her official debut. The Tankoa S501 Vertige represents the quintessential union between a highly qualified shipbuilder and a sales and marketing organization in daily contact with the owner, captain and consultant.

“It was a very interesting project as everyone’s intentions, from the shipyard workers to the management to the owner, was to create the most elegant 50 meter yacht on the market.

We are sure to have succeeded. Michel Karsenti, sales director at Tankoa Yachts, continues: “We are more than happy with the result. Creating a six cabin yacht, including two suites on the main deck, enormous open air spaces, yet keeping under 500 gross tons and maintaining such an elegant design has been very satisfying.”

Tankoa’s management has worked in very close contact with Francesco Paszkowski in project design to obtain a timeless perfectly balanced design that doesn’t worry about current market trends and to offer an ideal layout allowing owners and guests to circulate throughout the yacht without meeting any crew members, while at the same time allowing the crew to freely move around while carrying out their duties.

The project design also gives the owner of a 499 gross ton yacht the kind of comfort and equipment more commonly found on much larger yachts. The S501’s hull number one features six cabins, including an owner’s cabin and master suite on the main deck, two VIP and two guest cabins on the lower deck, a gym, home cinema, garage for the 7m tender, two jet skis with a second service tender forward, plus further features like full height glass widows and a hydraulic terrace in the owner’s cabin and the open air salon aft – all combining to increase her already ample dimensions. 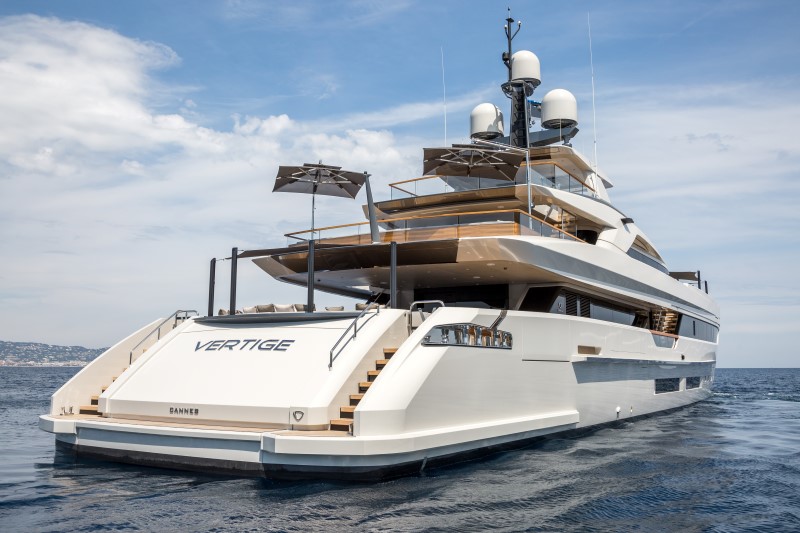 Maintaining a constant visual contact with the sea was one of the other objectives assigned to Paszkowski’s design team, who tells us: “The Tankoa S501 Vertige is the result of concerted action between the yard, the owner and our offices. We understood each other right from the start of this project’s development, which was characterized by in-depth research into materials and architectural elements, extremely careful work carried out in the yard – they completed the project with an excellent quality level – and, for the first time in a Tankoa, a plumb bow, giving us a glimpse of the future direction of the yard.

As for the exteriors, we went ahead on several different fronts: energising the dimensions of all exterior surfaces, from the sunbathing areas to the conversation zones; developing the exterior terraces, both fore and aft; amplifying the sunshaded areas with the use of convertible awnings. We have also removed the aft toe-rails to free-up the view and sunk the glass surfaces into the superstructure, eliminating any obstructions from the inside looking out.”

As expressly requested by the owner, the interiors were designed by Francesco Paszkowski Design Studio in collaboration with Margherita Casprini to reflect a “modern yet warm” atmosphere. “Being on the same frequency as the rest of the team allowed us to devote extra attention to material and architectural details,” confirmed Casprini. “The owner was in full agreement with our proposals, and on occasion enriched them with personal proposals, such as having two cabins on the main deck, the owner’s and a VIP cabin, similar but not identical.

We satisfied this request proposing the use of different colours for the same materials. In creating these interiors we added to the choice of materials the combination of various textures and colours like matt bleached uncoloured teak matched with glossy rosewood, a high-contrast mix, and the analysis of details like the shape of the steps on the formidable aerial staircase that connects the decks.

And finally, the layout of the lower deck and the use of that same teak let us create a luminous and welcoming crews quarters. The result is, without a doubt, the most beautiful 50 metre yachts ever built under 500 gross tons. The level of finishings, both interior and exterior, is in line with what everyone would expect to find on a much larger yacht.

The Tankoa Vertige S501 is entirely built of light alloy Aluminum 5083, decreasing weight and therefore fuel consumption, while guaranteeing ease of maintenance. Her construction was followed attentively by project manager Albert McIlroy, engineer and owner’s representative, widely experienced in the construction of yachts around the world but above all in northern Europe.

Referring to the work carried out on the S501, McIlroy said that “with the S501 the yard made incredible progress in managing deadlines and production work, with a Teutonic approach so unusual for an Italian yard that it left me speechless.

After having supervised the construction of yachts around the world, I can say that the work rhythm and productivity at Tankoa are exceptional; it’s probably the first time that I’ve seen build times respected while maintaining the incredible flexibility that Tankoa’s becoming known for.” This same flexibility is combined with another plus: Tankoa’s organisation and planning ability, choosing only the best sub-contractors and suppliers to offer a perfect Italian Style package at a price much more competitive than with our northern European colleagues.

As we already mentioned, the Tankoa Yachts management team and Pazkowzki worked in close contact throughout the design of the S501. Here Pazkowski created the Vertige concept, developing the deck layout and exterior design, with the priority objective of creating for the owner a 50 metre long yacht under 500 gross tons with spatial characteristics and equipment that, in today’s international panorama, are usually only found on much larger yachts.

The entire layout was specifically designed to offer maximum freedom of movement for owners and guests, letting them move from deck to deck and from inside to outside without mixing with the crew, who use their own special paths while carrying out their duties. The after area of the main deck includes an oversized sun-pad and a spacious open air lounge with bar, with twin three metre long extendable bulwarks to keep clients in close contact with the sea.

The after area of the upper deck offers a dining zone seating up to 14 guests for alfresco meals and a wraparound sofa seating more than 20 with a disappearing TV screen, while the forward part hosts a solarium and open-air lounge, offering guests the maximum in privacy. But what stands out most is the sundeck extension, featuring an uninterrupted view of the entire horizon from the open-air lounge and bar zone and including two solariums, one fitted with sunbeds while the second has it’s sunbeds surrounding the swimming pool and Jacuzzi.

Descending to the aft part of the lower deck, directly overlooking the water from a folding platform, we find the beach club, with a bar zone and gym with shower and day toilet. To complete the rich list of features offered on board the Tankoa S501 Vertige we have the garage and jet-ski storage area.

The garage for the seven metre main tender occupies the aft end of the lower deck, while the jet-ski storage area is forward on the main deck and also houses the second tender in addition to two jet-skis.

With only a few choice materials, an extremely high level of finishings and other elements chosen ad hoc, Paszkowski and Casprini have obtained inviting and elegant interiors, simple yet sophisticated. The yacht’s leit-motive is the constant balance between the teak and rosewood. Teak was used primarily with a bleached finish while the rosewood was chosen for some of the furniture; paneling and trim feature bronze, increasing the comforting sensation of warmth.

Leather panels and flooring are plentiful on board, above all in the lobby and some of the cabins, while further panels of braided leather, in varying neutral tones of colour, give a touch of uniqueness and rise to their role of small works of art. “The main idea was to create a style that reinterpreted furniture from the 1950’s; here the rosewood was of fundamental importance”, declared Paszkowski and Casprini. 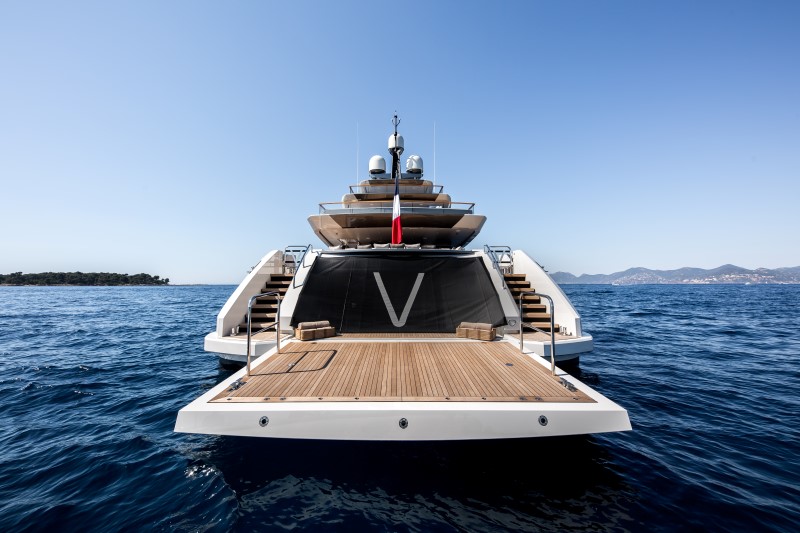 One of the owner’s indispensable requests was to have two cabins on the main deck and four twin cabins on the lower deck. To satisfy this request we optimised the main deck layout with the full-beam owner’s suite forward, complete with its dressing room and private lounge, with two electrohydraulic hatches that open to create two private balconies over the sea.

A master suite is located behind the owner’s suite. A complete and panoramic vision of the seascape characterises the main salon, thanks to intelligent retractable sidewalls ad hoc and full height windows. After the salon comes the dining area, with a table that can comfortably seat up to 12 guests.

Two VIP and two guest cabins are located amidships on the lower deck, each with its own private bathroom. The forward part of the lower deck hosts the crew quarters for up to eight crew; from here they can easily move from deck to deck and inside to out, without disturbing the guests, following the corridors specifically designed for their use. The same finish of teak from the other decks is used here and creates a luminous and inviting crew quarters.

THE YARD’S COMMENTS AFTER THE FIRST SEA TRIALS

Tankoa Yachts is very enthusiastic with the results obtained during the first sea trails of the new S501 M/Y Vertige. Based on the specifics of the contract, top speed was to be 16 knots at half-load. The sea trial performance results for the 50 metre M/Y Vertige were supposed to have been carried out with a calm sea and in five knots of wind.

The actual trails took place instead in a short 70cm chop and a strong northerly of 25 to 30 knots. Edoardo Ratto, general manager of Tankoa Yachts: “The first sea trail lasted about eight hours and was simply incredible. Vertige reached her top speed of 16.5 knots with a 60% load (about 3 300 litres of diesel and more than 20 000 litres of water).

The S501 will have a cruising range of over 5 000 nautical miles at 13.5 knots – this will make a real difference when crossing the Atlantic. Vibration is non-existent and the noise level is below contract: in the owner’s and VIP cabins it’s less than 50 db.”

The first trials also evidenced the noteworthy manoeuvrability of the Vertige as she undertook the tests required by international norms: the yacht demonstrated incredible stability even when the stabilisers were deactivated.

Displacement at half load: 352 tons 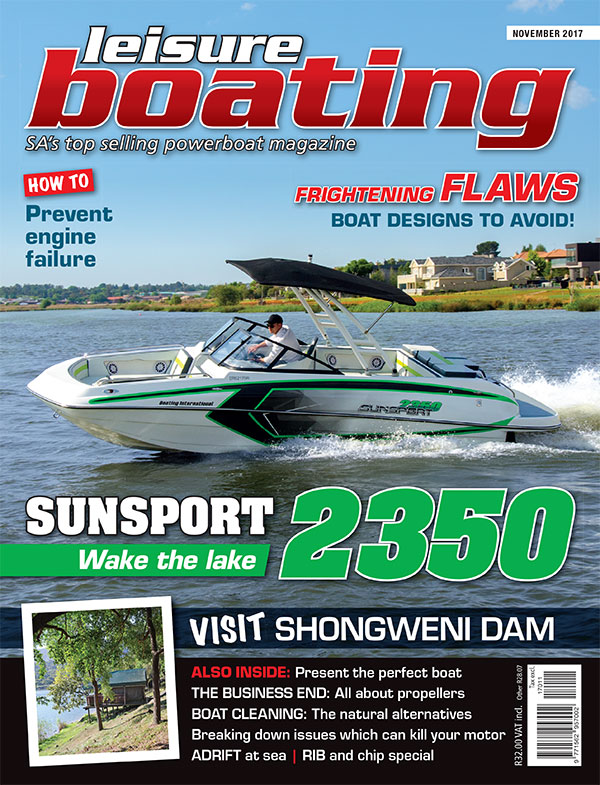