This is the boat that not only sets the benchmark, but in fact defines the very elements of what a modern luxury power cruiser should be. The Fairline Targa 38 is renowned for its scintillating performance and handling, clean contemporary styling, and large, luxuriously equipped living areas. It’s fully equipped to be the perfect sports cruiser, but how would it fare here in South Africa? The Editor takes a short stroll down memory lane in reviewing this 2015 model.

The Targa 38 has been one of the fastest-selling models in Fairline’s impressive range and even won the prestigious ‘European Powerboat of the Year’ for 2007 in the 30 to 40-ft category. It’s not surprising though, because since the first Targa took the market by storm back in the early 1980s, the company’s game-plan has been evolution rather than revolution. A heritage like that is the absolute cornerstone to making the best even better and should put it top of any list for someone looking to buy a luxury power cruiser.

It comes as no surprise that the new 2015 model looks just like the Targas before it. Get up close, however, and this boat’s fresh new design elements announce themselves with taller side screens, a razor-sharp radar arch and natural ports cut into the boat’s topsides. What’s important to note is that, being built in Australia, Fairline boats are designed to be equally at home cruising along the coast or leading the pack in open waters. Think of it as a sports utility vessel that international journalists call “a perfectionist’s attitude to outdoor life”. The Targa 38 is available in the standard and Open options. 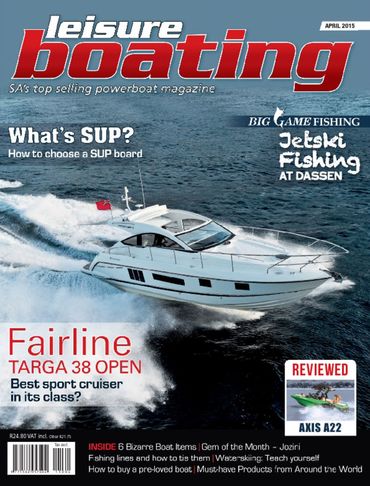