Trending
Subscribe
You are at:Home»Articles»The Banning of 2-Strokes: MYTH OR MYSTERY?

While several environmental issues call for the “ban” of outboard engines not complying with emission standards, the attention is immediately drawn to the old technology, carbureted 2-Stroke motor. But does this banning include the modern 2-Stroke, or is the outlaw of 2-Strokes just another urban legend? Leisure Boating finds out.

For nearly 100 years, the conventional 2-Stroke outboard motor has been an essential and prized possession of many fisherman and recreational boaters. Although smelly and loud, they have been embedded into our summer culture by bringing back a flood of memories filled with fishing trips and lazy summer afternoon on the dam or river.

“No 2-Stroke outboard will be banned from our waterways at the moment”.

However, sentimental recollections aside, it’s said that changes within the outboard market are on the horizon. More and more traditional outboards (like the older technology 2-Stroke) are being replaced by “cleaner” engines that comply with new 2014 emission standards.

The change has been driven by the Environmental Protection Agency (EPA), which has mandated a 75% reduction in outboard hydrocarbon and NOx (Nitrous Oxides) emissions by 2012, with tougher ones on tap for 2014.

With environmental issues like global warming and climate change putting pressure on the outboard market, the move to a more eco-friendly motor has certainly upped the demand for “cleaner” burning technology while some manufacturers have halted production of their 2-Stroke line and opted to go the 4-Stroke route.

But do these strict emission standards and environmental pressure spell the end of the 2-Stroke on our waterways? Some would say yes, but then there are others who believe that modern 2-Stroke possesses the same environmentally-friendly qualities as its 4-Stroke counterpart.

Damage to the 2-Stroke’s reputation? 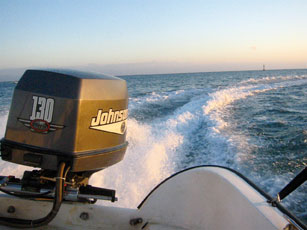 A recent study by U.S. scientist Russell Long revealed that the world’s conventional 2-Stroke motor market generates about 1.1 billion pounds of hydrocarbon emissions each year. He said that the high emissions are attributes to the design inefficiency of the old 2-Stroke motor, which has remained essentially unchanged since the 1940s.

The EPA recently released statistics that indicate that the conventional 2-Stroke engines discharge as much as 30% unburned oil and fuel directly into the water. They claim that the old carburetted 2-Stroke spill 15 times more oil and fuel into our waterways than the Exxon Valdez disaster of 1989.

The environment seems to be the reason for the shift in technology. Four-Stoke manufacturers will point out that their motors are “easier” on the water as 4-Stroke oil is not mixed with the fuel, thus there’s far less chance of oil entering the water. There’s also less smoke with a 4-Stroke, making it a big selling point for eco-friendly buyers.

Heyns’ point is backed up by his product, as Evinrude’ E-TEC is one of the only 2-Stroke motors that are three-star, low-emission rated. The older, carbureted 2-Stroke has virtually retired, and is being replaced by state-of-the-art, direct- and fuel-injected 2-Stroke motors with precise injection ratios, available in a bewildering array of horsepower ratings.

For many years, the old, carburetted 2-Stroke motor suffered a reputation as a fuel-slurping, dirty-exhaust outboard. However, with the introduction of modern, cleaner-burning technology, many feel that that has changed. So is it simply a case of all 2-Stroke engines being judged under the same dirty, old umbrella?

CMH Marketing Manager Fred Fensham also defended the 2-Stroke by saying that emission regulations do not legislate with regard to technologies or consumers. “This means that there will be no laws banning the use of any outboard motor, other than new motors sold after a specified date on any U.S. or European waterways.”

And he’s right. Depending on what you believe, no 2-Stroke outboard will be banned from our waterways at the moment. However, the EPA’s actions suggest that they carefully plotting the complete phase-out of the older technology, step-by-stringent-step.

While European and USA consist of many waterways with emission restrictions (mostly for environmental reasons), one thing is for sure: On the African continent, 2-Stroke motors are here to stay as long as certain manufacturers keep producing them.

In developing markets like South America and Africa, reliability and low cost are the key selling points for an outboard motor. Africa doesn’t consist of any strict environmental regulations, so the lightweight, dirt-simple carburetted 2-Stroke motor remains popular.

“Africa has become the dumping grounds of the world’s unwanted old-technology 2-Strokes,” said outboard dealer, Dave Hoets. He added that although the old 2-Stroke is popular in developing third-world countries, it’s only a drop in the bucket for the manufacturers, whose biggest market lies in Europe and the U.S.

While only about 4 000 outboard units are sold annually in South Africa, recent study shows that the 2-Strokes (old and modern) account for 54% of the market, while 4-Stroke make up the remaining 46%. “That’s because we have little emission restrictions in South Africa,” said Hoets.

The department of Environmental Affairs’ director of communications Albi Modise confirms this by saying: “From a national perspective, emissions from small boat outboard engines are insignificant and, as such, are not a priority for national regulation”.

Even though EPA emission standards are getting stricter by the year, the conventional 2-Stroke isn’t likely to become a dinosaur anytime soon. It’s a fact that new technology engines are taking over the market as consumer realise that it’s cost-effective to change. Obviously, it’ll take time to fade the old technology out completely.

It’s unsure where the “ban 2-Stroke” rumour started. Some believe it’s just another sales gimmick from 4-Stroke manufacturers to plug their product. However, before we make this a 2-Stroke vs. 4-Stroke debate, it’s important to distinguish between the modern 2-Stroke and old, carbureted 2-cycle engine and what impact each motor has on the environment?

“Our fuels are good enough for all engines and whichever way you look at it, our inland waters need to be cleaned up in a collective effort. Water is our most important commodity, and needs to be protected,” said Hoets.

Having said that, there are many modern 2-Stroke motors out there (i.e. Evinrude’s E-Tec) that not only conform to emission restrictions, but also deliver the same level of performance as a new 4-Stroke.

“We can confidently state that nothing is being taken over, and that Evinrude’s E-TEC is the cleanest outboard in the industry by a wide margin,” said Heyns. Evinrude E-TEC is the only 2-Stroke motor approved for use on Lake Constance, which supplies drinking water to more than 4.5 million Europeans.

Heyns believes it all comes down to a matter of choice. “The decision lies with the consumer to choose 2-Stroke or 4-Stroke. However, certain modern 2-Strokes are just as clean and will never be banned as long as it complies with emission standards. The same can be said for 4-Strokes. In the end, one should choose the motor that does the least damage to the environment”.

Suzuki’s DF60 is the lightest and most compact designed engine it its class. It replaces the current 4-cylinder single overhead cam model. The DF60 is 941 cc and weighs a mere 104 kg.

Honda is 2014 EPA compliant across their range

Their most obvious improvement here is the fuel-injector. Smaller electronics allows the engine to operate at cooler temperatures, equating to durability. The injector has fewer parts and requires fewer tight tolerances, which lowers manufacturing costs.

Mercury’s Verado 4-Stroke force-feeds cooled air (dense and jam-packed with oxygen) into the combustion chamber. Supercharging builds huge torque numbers from idle all the way up to the nether reaches of the RPM band. CARB 3-star rated.

“Is it simply a case of all 2-Stroke engines being judged under the same dirty, old umbrella?”