The annual 2012 Durban Ski-Boat Club’s Ladies Fishing Festival was held recently, sponsored by Honda Marine Pinetown. The much-anticipated event began on the Saturday afternoon with a cocktail party and registration. The ladies enjoyed the opportunity to socialise and strategise over a glass of bubbly and snacks, while discussing the great gifts and shirts they had received in their ‘goodie bags’. 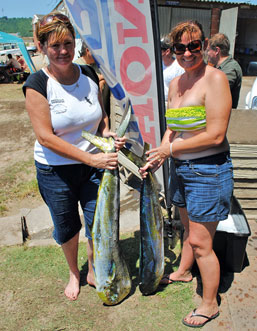 By the end of the afternoon, more than 50 ladies had registered to fish in the competition, with more expected the next morning before the launch. The weather seemed to play ball, as the next morning at dawn, it was wind-still and slightly overcast with a small swell running, ensuring a safe and easy launch. At 05h00, boats began entering the water with the Honda Marine ‘boat-pusher boys’ working hard to launch the boats and their crew through the small shore break.
By 06h00, all the participating boats had disappeared into the ocean, speeding off in different directions, trying to capitalise on the favourable conditions and low lights. This proved to be a wise strategy as many good fish were boated in the early hours of the competition with fishing getting a little more challenging as the wind picked up around 09h00, which increased the swell and made the waters choppy. These conditions proved to be slightly uncomfortable for some of the ladies who returned to shore long before the cut-off time of 13h00. A crowd of spectators and supporters grew steadily as the morning progressed with many milling around the display boats examining and discussing the Honda motors on show. Certainly the Honda marine displays, as well as the banners and flags fluttering in the breeze gave the event a feel of fanfare, contributing to the vibe and excitement at the club. As you can imagine, there was an buzz of excitement around the weigh-in station as the boat returned to base to weigh their catch. Crews of ladies could be seen peering at the scales to see how their fish compared with those of other contestants. What was very pleasing was to see the variety of fish that had been boated, with almost every boat bringing something to the scales. It was obvious that game fish was the targeted quarry of the day with catches of Couta, Snoek, Dorado, Yellowfin Tuna and Bonita making up the bulk of the catch. Other catches included a Prodigal Son and good specimens of bottomfish such as Soldiers, Slingers and Lanterns.

The ladies stood around enjoying some much-needed refreshments as the sun had taken its toll during the morning, with temperatures soaring around the low 30s. The suspense increased as those that had already beached, waited patiently for the 13h00 cut-off, to finally confirm their place in the standings. The weigh-masters made quick work of tallying up the scores and rankings for the prize-giving. The rules of the competition were simple with prizes going to the 10 heaviest fish of any species, except billfish, sharks and flatfish.

Finally, the moment of truth arrived and everybody waited chatting, whispering and speculating on the outcome. Hilton Kidger, commodore of Durban Ski-Boat Club thanked Honda Marine Pinetown for the outstanding job they had done in organising the event and for their unwavering support in the fishing and boating arena, and more especially, in the development of ladies fishing. The results of the competition were pleasantly surprising with the ladies proving that they can certainly hold their own when it came to catching fish. The results are as follows: Mel Harris was very pleased with her Couta of 17.4 kg, the largest fish that had ever been weighed in over the whole history of the competition. This great achievement saw her walk off with the first prize, namely a gift voucher to the value of R3 000 presented to her by Oliver Nudds from Honda Marine Pinetown. All of the other top 10 anglers also received gift vouchers of varying values. Prizes were also given to the top three skippers of the day, along with numerous lucky-draws and even a few booby prizes being handed out.
Prize-giving was followed by a delicious lunch of lamb on the spit with all the trimmings which contestants, skippers and club members enjoyed until late into the evening. Everybody applauded Honda Marine Pinetown for a job well done, as well as the club and organising committee who had worked so hard to make this event an annual attraction on the Durban Ski-Boat Club calendar. Judging from the interest shown and the sentiments of commitment expressed, next year looks set to be even bigger and better than this year, when the ladies will once again be given the opportunity to show their skill with the rod and reel.