Trending
Subscribe
You are at:Home»Articles»Road to solar power: Part 2

If you do follow your bliss you put yourself on a kind of track that has been there all the while, waiting for you, and the life that you ought to be living is the one you are living. Follow your bliss and don’t be afraid, and doors will open where you didn’t know they were going to be. – Joseph Campbell

To begin with we purchased a 90 Watt solar panel and a P.W.M. Charge controller. A steel tubing construction was made to house the solar panel above to get max sunlight without obstruction. It was secured above onto a canvas that gave shade to the occupants.

Several tests for short periods of time were made at Coligny’s Taaibosspruit Dam in good weather conditions. With the possibility of exploring in mind we named the boat “Spirit of Kon-Tiki”.
We then took the boat to Barbers pan where it is known for it’s ” four seasons in one day” weather, strong wind with large waves , and that was exactly what I hoped for to test boat stability and penetration into the wind. We found the pontoons cutting through the waves,  giving a comfortable ride, but with the single 40lbs trolling motor our speed against the strong wind were a mere half to one knots per hour/1 to 2 km/h.
Barbers pan’s waters covers an area of some 2000 hectares.
Here I stand very proud of myself after doing our first exploration trip in rough conditions with an under powered solar boat! 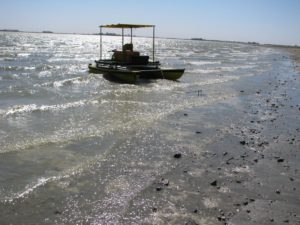 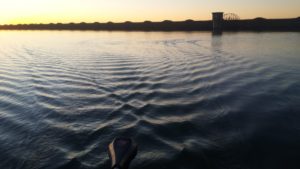 We cruised for many hours on Disaneng Dam, testing the power system and enjoying the freedom! 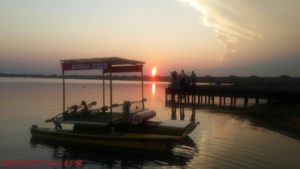 The 90 Watt solar panel provides a maximum of 4 Amps power, not enough to sustain the battery for too long. Thus, to match the motor’s current draw, more solar panels needs to be installed.

Is a solar power setup very sophisticated and difficult to install?

In fact, there are only two wires, a positive and a negative and four items that are inter connected. It is, however, important to connect them correctly, always positive wire to positive connection on the battery, solar panel,  charge controller and motor. Same rules apply for the negative connections.

We were pleased with the boats safety aspect and I felt more confident to take on larger lakes, but the power had to improve. Ideally the output from the solar panels should match or exceed the motor’s current draw. Our vision was to explore the Gariep Dam as a challenge as soon as improvements were made to the power system.