Light tackle spinning with artificial lures is definitely one of my favourite ways of fishing. Here in South Africa we have an abundance of fresh and salt-water fish species that can be targeted using this method of fishing, while the list of lures are seemingly endless. 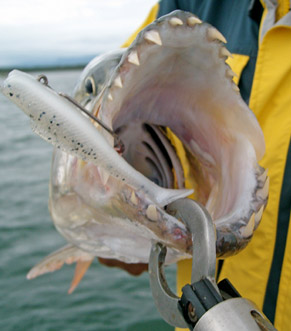 Spinning is known in Japan as the Lure Casting Game. These guys are the true masters as they mostly fish heavily targeted areas where the fish are “educated”. I had the privilege of fishing alongside some of them over the past few years and my eyes were really opened to this kind of fishing. One of the characteristics of a good spinning set-up for lure casting is that the set needs to be low in weight, as using a heavy set-up will impede on a person’s ability to control the lure correctly and will also cause fatigue and even muscle and joint damage to the angler. I also prefer using smaller reels for this kind of fishing as it allows more control.
Longer rods will allow a person better casting distance, while shorter rods make for better casting accuracy and more importantly, better control over the lure. Looking at my set-ups I would say that all my favourites vary from 6’2” to 6’8”. Typically, I prefer a spinning rod with a light sensitive tip and a strong butt section. Form and movement is everything.By form I mean the shape and size of your lure, and movement – the speed and action of it. Of course factors like colour, contrast, hot spots and noise play a part, but I believe that the form and movement of the lure is key to successful spinning. With my style of spinning I like my rod tip pointing down towards the water, keeping it lower than the reel.

I find this is the most effective way to get the best action from the lure. It also increases sensitivity as your line is not affected by wind, allowing for more direct contact to your lure. This type of spinning is not really possible with a long rod – a large part of the reason why I prefer shorter rods. Retrieving will vary according to the lure used, but particular attention needs to be paid to the rod tip as the movement of the tip is directly proportionate to the lure movement. Simply casting out and retrieving a lure is not sufficient and is unlikely to produce good results. One needs to focus and pay attention to what is happening, where the lure is, what it’s doing, how to make it do what you want and what reaction it has to what you do to the rod.

When buying a new lure, I strongly recommend a practice session in a swimming pool to learn how that particular lure works and how it responds at various speeds and with various rod actions. Pausing, jerking, dropping, lifting, skipping, twitching and many other actions are critical to success and one really needs to learn how to utilise the lures properly while constantly varying your retrieves and actions. Low-priced lures usually fail to produce the desired effect as they are unbalanced; don’t ‘swim’ properly; and generally can’t be tuned. Colours & Character It is true that certain colours work better than others, but this will vary and depend on area and species targeted. When spinning in Durban harbour for instance, brighter lures with chartreuse or hot pink will produce the best results, whereas at Kosi Lakes subtle colours with greys, silver and black usually work best. Water clarity also plays an important role. Blue lures do not work in Durban harbour, while just outside the harbour it becomes extremely effective.

Lures with ‘hot spots’ like oversized eyes; red gills; an orange chin; or a black dot on the tail area will often be more effective than plain lures. High-contrast two-toned lures also tend to do the trick. Retrieves and actions Fast Jerk This is probably one of the most important retrieves to learn for estuary and inshore lure fishing and is usually done best with shallow running minnow-type lipped lures like the Rapala X-Rap splash bait, but there is a host of other specialist Japanese lures available for this type of spinning at places such as Tackle House or Mega Bass. With this retrieve the rod tip should be kept low, and while reeling you should synchronise the medium up and down movements of the rod tip (+/- 300-400mm) with a full turn on the reel, making the whole action a singular movement. When using a suspending lure, it is good to pause in the middle of a retrieve for a few seconds and then continue retrieving.

Twitch Jerk This is a slower retrieve but it tends to be effective. Jig head lures (drop shot); buck tail jigs; and top water stick baits all complement this method. Keeping the rod tip down, you improvise short jerks with the rod tip (100-150mm) and synchronise this with half turns of the reel. This retrieve will allow the weighted lures to rise and sink and will give stick baits a left-to-right (walk the dog) action.

There are many more ways one can manipulate a lure, some lures have inherent movements while others require complete manipulation by the rod in order to perform.