If you can see your path laid out in front of you step by step, you know it’s not your path. Your own path you make with every step you take. That’s why it’s your path. – Joseph Campbell

With an improved boat we were confident that we would get much further this time. 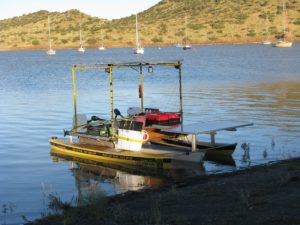 We added a 3rd pontoon. The solar panels were once again placed as a roof over our heads. We installed another 250W solar panel alongside our 90W panel at the front of the boat.The power system problem was resolved. A defective battery was replaced.

Without backup we cruised into the Gariep Dam’s vastness.(👈Watch an interesting Kwêla KykNET Youtube video about the Dam, people and town here.)  This time we chose the end of March to hopefully have good weather. The boat really performed well and we cruised anti clockwise, beginning at the Yacht club. We cruised through the Main Basin, went through Porcupine Passage into Mud Plain Basin, back up again through Springbok Basin and late afternoon camped in Kiewiet’s Bay. 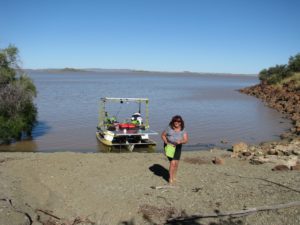 Unpacking and preparing the camp

The next day we went down south into Middle Basin and back up to Oviston Basin. While cruising we checked the weather update on Windfinder and the prediction was not good. It predicted a 27kts north westerly wind and thereafter storms with  rain.  We decided to carry on to the Oviston Tower from where we would begin our return back towards FSYC. , spending the night nearer to our starting point.

Near Porcupine Passage the day was ending and we discovered a nice little bay. It had a mere 12m wide smooth rock free entrance. Once again we camped in bushveld style and had a wonderful experience.

The next morning was perfect conditions for a solar boat, but we knew we had only a few hours left before the predicted stormy weather would set in.

On our return trip in Main Basin abeam Sonop Island the predicted wind hit us with force.  We had  however still full sunshine and thus full power and headed towards the northern shore for some shielding from the wind blowing in from behind the surrounding hills. West of Aerodrome Bay lay the dangerous Crocodile Reef. This forced us to go into the open waters again clearing the reef to avoid disaster. The rough waters were handled quite well by our Trimaran. The strong wind reduced our speed to only 2 knots at times, but we reached the safety of the Yacht Club without problems. Soon afterwards the might of the storm hit the area with heavy downpour.

With this trip we managed to explore 50% of the dam and logged a total of 88km’s in only two and a half days, using only the sun as propulsion.

What did we learn?

We realized that weather plays a major part in hindering our attempts to explore the whole of the dam. What we need is a boat that we can live in, safe from the elements, so that if bad weather occurs we can wait it out, living and sleeping in the boat until it clears and then continue to complete our mission.