You must give up the life you planned in order to have the life that is waiting for you. – Joseph Campbell 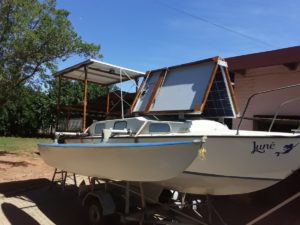 The small yacht was converted into a trimaran and is now solar powered.
Mid mounted solar panels are shown folded up for road transportation. 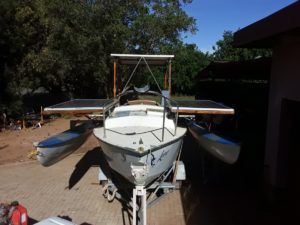 The rear solar panels forms a roof over the wet deck area
and the mid mounted solar panels are shown here
folded down in their power production positions. 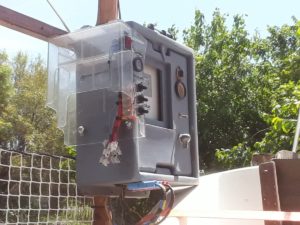 We bought a small sailing yacht and began the process of  restoring  and converting it into a solar powered boat.

1) Two removable pontoons were added to the sides of the boat. This  stabilizes the rolling motion and improved total buoyancy and safety.

2) Above the rear wet deck area we constructed a frame to house two large solar panels. This also forms the roof to protect the occupants against the harsh South African sun.

3) Another two large solar panels were fitted with hinges  near the center of the boat. Placement was done so that when on road transport they fold up towards each other to the center to form a triangle where they are secured. On the water they are folded out flat, but each one can be adjusted at an angle for best efficiency. With this set up we have a potential of 1kw. of solar power. Cruising  speed will increase, penetration into strong wind will be possible and we will also be able to begin cruising earlier in the morning and until later in the afternoon. Bad weather can be waited out on the water on anchor or buoy. Sleeping can be done in the boat on the water on anchor.

This is a huge challenge for us and by using the largest inland mass of water in the country makes the challenge more demanding and interesting.

Those who have been following this blog might have asked the question, ” but why? ”

Surely there are solar powered yachts that have already cruised around the world setting records such as PlanetSolar.

Cruising with a solar powered boat is very special. The workload is minimal in most all types of weather conditions and it is very relaxing. It has a small visual footprint and cruises in total silence. Because it is not fuel dependent long trips into remote areas can be done. Once on the water the cruising energy is unlimited and free. This opens the possibility of exploring hundreds of large inland dams, lakes and lagoons per country.

My goal is to prove that practical solar boating is possible by using existing boats and converting them to solar powered propulsion, using readily available off  the shelf industrial equipment. Sailing boats are designed to have very low drag and are thus the ideal candidate for a low powered solar setup. There are hundreds if not thousands of abandoned small sailing boats and yachts at marinas and clubs. . This is so sad and unknown to the owners new life can be injected into the boats and their owners boating experience by converting them into solar powered boats, without costing an arm and leg. Solar electric power is fairly new and is n modern approach to powering boats. There are, however, many benefits of using solar power as propulsion.

All Tools and spares as required for this boat’s setup and maintenance.👍

Below is the charts of the Gariep Dam. This gives a perspective of the enormity of the area we want to explore.

Next trip: Conquering the Gariep Dam

Mission: To cruise through the entire dam, from the dam wall, following the original river flow in the dam up to Bethulie. Our turn around point will be the Hennie Steyn bridge, longest bridge in South Africa, near Bethulie. With the return trip we plan to visit each known and unknown bay and island in each of the different Basins that the Gariep Dam’s water formed. A ravine, Broekspruit, is also on the list to be explored. We want to log as many km’s as possible with this trip to prove that our solar boat is practical and have endurance.