Trending
Subscribe
You are at:Home»Articles»Road to solar power: Part 7 – The Big Tour

With some trail and error we eventually managed to fit everything into the car and boat. We freezed 22 one litre Coke bottles (filled with water) and placed them in our large cooler box. We then packed our frozen meat(sealed in ziplock bags) and butter between  the frozen bottles. This was our freezer experiment that proved to had worked excellent in keeping the meat fresh and provide us with cold drinking water during our trip.

Due to  Covid 19 😷 restrictions we could only depart after 04H00 AM on Saturday the 19th of December. As soon as we left the rutal area, at only about 4km’s out of town we had a catastrophic tyre failure on one of the boat trailer’s tyres.  We replaced it with the sparewheel and returned home immediately. 🙄. 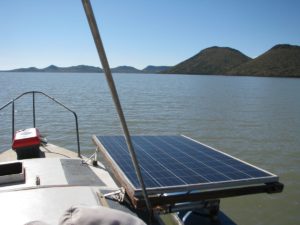 I contacted a local tyre shop and enquired about some heavy duty comercial type tyres for the boat trailer. Luckily their delivery truck was in Pretoria at the time and could bring us the two tyres requested. By 11H00 the tyres arrived and were fitted onto the wheel rims. They had a higher profile and also a higher ply rating, meaning that they could carry a heavier load than normal low profile car tyres. I fitted the wheels and we decided to leave early the next morning. 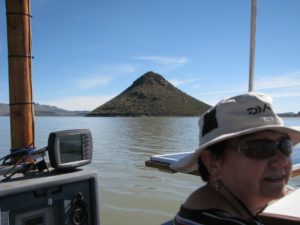 On Sunday afternoon the 20th of December 2020 we arrived at Gariep Dam. The ambient  temperature was 36°C when we arrived. A strong westerly wind was blowing. We decided to rest at the Yacht Club and waited until weather conditions improved. We joined the Free State Yacht Club for the month of  December.  We slept in our boat on the trailer on shore that night. We were glad we were not on the water as the stormwind blew throughout the night.

The next day we launched the boat and packed our stuff into it the for the trip. The storm wind subsided, but it was cloudy. We took the boat out into the Main Basin and cruised for an hour(5km’s) to test and check all systems while Ronél organised the sleeping places and kitchen inside the cabin.

On Tuesday, the 22nd, it rained continuously and we decided to tour around the dam by car. We visited Bethulie, drove over the mighty Orange River at the longest bridge in South Africa, the Hennie Steyn Bridge. When we saw the water inflow and speed into the Gariep Dam, we realized that our boat might not be able to penetrate in against it. There and then we decided to make our mission to cruise to Broekspruit and out of the Gariep dam, following it to underneath the bridge on the road R390 and back. We then drove over the Broekspruit at the bridge where the road R390 crossed it. Crossing underneath this bridge with our solar boat was the latest main challenge we set for ourselves, it could be possible, as the dam level was already 80% full and rising.

That late afternoon the cloud cover began dissipating and we slept in our boat on the water for the very first time that evening. The weather forecast for the next few days and beyond  Christmas day was light to moderate winds with clear skies. 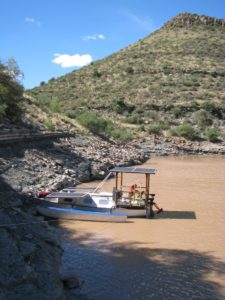 Indeed, the next morning at 07H20 we cruised out of the harbor in perfect conditions for solar boating.  By 09H00 we were using both the 40lbs and 65lbs Trolling motors at full power, reaching a speed of 6.5km/h. We cruised through the Main Basin eastwards, entered Mud Plain Basin through Porcupine Passage, went past Zimbabwe cliffs and made a wide turn in Mud Plain to avoid a dangerous stone outcrob and continued north east into Springbok Basin. Leaving Springbok Basin and entering Middle Basin eastwards the huge tower at Oviston was not yet visible. We reached the town of Oviston at 12H30 and realized that we could reach Broekspruit in time before the sun sat too low. We carried on and entered the vast Oviston Basin, turning north into it, navigating in the center of the waterway. The next landmarks to indicate entry into Broekspruit Basin was Lions Head and Tikinie Heads, two prominent hills on the northern horizon. We turned east at  Lions Head into Broekspruit Basin and headed for Wildeiland. Near the Broekspruit entrance into the dam the water became muddy red and we had to steer carefully due to a large amount of driftwood present. Entering the narrow Broekspruit from the dam was really beautiful and interesting. It forms a narrow  passage with high rocky cliffs on both sides. Huge stones stacked on each other resembled the ancient Inca civilization buildings. After only a short cruise the ravine suddenly opened wider to form a small lake surrounded by mountains with high cliffs. Time was just after 15H00, distance covered was 46km’s and we decided to spend the afternoon and night there. We docked next to a high cliff, secured the boat and enjoyed the quietness in supreme unspoiled beautiful nature.

The day before Christmas at 06H30 we cruised slowly out into the country on Broekspruit. We passed a  mountain with high rocky cliffs and saw some baboons watching us from high up.  With each bend in the ravine the hills became smaller and we encountered many water birds on the banks and in the water. The ravine became shallower as we neared the bridge on the R390. We slowly approached the bridge with our eyes glued to the depth indicator. We passed underneath the bridge in only 5 feet deep water! We did It!

Cruising back we used full power and reached the Main Basin by 15H00. We found a sheltered bay near Xmas Island to spend the night. The distance traveled from Broekspruit to this bay was 41km. We returned to the Main Basin to be near Xmas Island because we planned to have a picnic on Christmas day on Xmas Island. Weather was perfect and we had a braai on the beach and a good night’s sleep. It was a very special feeling to have all of the vastness of Gariep Dam for ourselves! 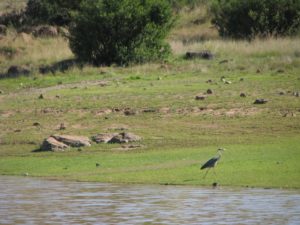 On Christmas morning it was calm  conditions, the water was mirror like. We slowly cruised out of the bay using every second to take in the special scenery. Xmas Island was only 3km away and we found a nice safe place to go ashore and secure the boat. We went on land and walked along the rocky shore looking for a picknic spot. We suddenly found ourselves being attacked by hundreds of thousands of army ants! We had to do some fast tapdancing to get rid of the ants! This is where Ronél slipped, fell and hurt herself  badly. We tapdanced our way back to the boat and prepared our Christmas brunch on the boat. Boerewors was barbecued, eggs fried and served with baked beans and sweetcorn. For dessert we had instant pudding and Koo yellow peach halves with custard. It felt like Christmas!

With bellies full, Ronél was made as comfortable as possible. For her to sit down was very painfull and barely possible. We cruised the 10km’s back to the FSYC and spend the afternoon resting and nursing the injured sore bum!

Because Broekspruit was such a special and unforgettable experience and with Ronél’s injury we decided to end the expedition, packed and went home. 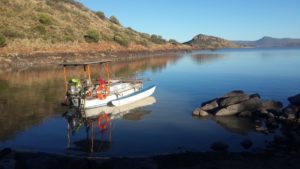