The Great White Shark, one of the world’s most fearsome predators, is under threat – even more than previously envisaged. It was recently discovered that the global population of the species has been grossly overestimated and that as little as 50% of what was formerly approximated now remain. 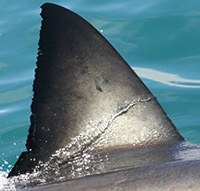 Biologists at the Dyer Island Conservation Trust (DICT) and Marine Dynamics recently conducted a study in the Gansbaai region that indicated that the open population of White Sharks in the area could be fairly estimated between 800 and 1000 animals – half of the original assessment of 2000. This led to the subsequent conclusion that the global population of White Sharks – already listed as a species ‘vulnerable to extinction in the wild’ by the International Union for the Conservation of Nature (IUCN) – generally estimated between 3 000- 5 000, may also have been significantly overrated.

That DICT’s study involved taking more than 20 000 photographs of Great White Shark dorsal fins between 2007 and 2012 in cooperation with Marine Dynamics Shark Tours in the sharkdense Gansbaai region from their vessel, Slashfin. A shark’s dorsal fin is like a signature as each individual’s fin is unique and the researchers accordingly adapted a computerised fin-recognition programme previously used on dolphins to identify White Sharks. The full study was recently published in PLOS ONE. 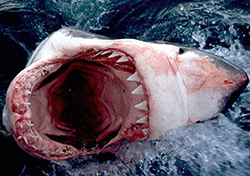 Over the five-year period, a mere 532 individual White Sharks were successfully identified. As individual Great White Sharks are not resident to Gansbaai, DICT marine biologists reportedly used so-called ‘open population statistics’ to extrapolate their findings to estimate the number of Great White Sharks in Gansbaai to be less than 1 000 individuals. “These results came as a surprise to everyone, as previously unpublished but widely accepted estimates based on non-computerised photographic studies predicted the population was twice this number,” says Alison Towner, a member of the research team.

Gansbaai seems to be the only location where this type of photographic study has been conducted and therefore there exists no concrete evidence for the overall global numbers. However, from the Gansbaai study it can be concluded that the world’s White Shark numbers have been significantly exaggerated and that the species as a whole is, as a matter of fact, in grave peril and closer to extinction than ever before.

We ran a feature in our May 2013 edition on White Sharks being targeted off Mozambican shores by an alleged Chinese syndicate. The syndicate is believed to be operating out of Inhambane, Mozambique, employing local fishermen and exporting shark fins to China for the highly popular dish of shark fin soup. .. 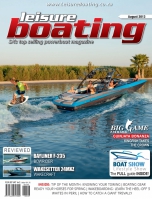